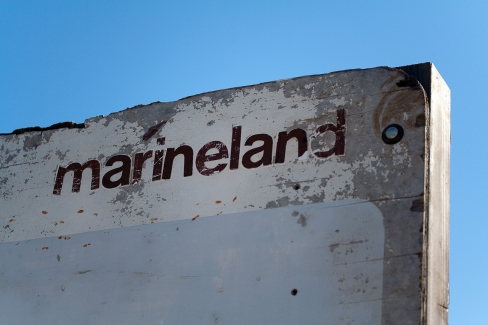 Speaking of Helvetica—I was at the Point Vicente lighthouse yesterday and stumbled across an awe-inspiring, dilapidated sign/map that used to belong to Marineland of the Pacific, a sort of 1950s Sea World that used to inhabit the Palos Verdes peninsula. The park was apparently designed by William L. Pereira, a very notable modernist architect who later went on to design the Transamerica building in San Francisco, and was one of the designers responsible for the ridiculously cool, “Googie” style “Theme Building” at LAX airport. It’s difficult to be sure exactly when this sign panel was created, since Marineland was open from 1954 to 1987. But with Helvetica being born (as Die Neue Haas Grotesk) in 1957, the illustration style, and the level of decay, I’d imagine that this was probably crafted during the typeface’s early 1960s heyday1.